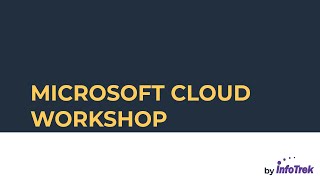 In this workshop, you will gain a better understanding on the steps involved in modernizing legacy on-premises applications and infrastructure by leveraging cloud services, while adding a mix of web and mobile services, all secured using Azure Active Directory.

This workshop is intended for Cloud Architects and IT professionals who have architectural expertise of infrastructure and solutions design in cloud technologies and want to learn more about Azure and Azure services as described in the ‘About this Course’ and ‘At Course Completion’ areas. Those attending this workshop should also be experienced in other non-Microsoft cloud technologies, meet the course prerequisites, and want to cross-train on Azure.

Workshop content presumes 300-level of architectural expertise of infrastructure and solutions design. We suggest students take this prerequisite prior to attending this workshop.

At the end of this workshop, you will be better able to design a modernization plan for organizations looking to move services from on-premises to the cloud.

• Configure and run the mobile application

• Create an app in PowerApps