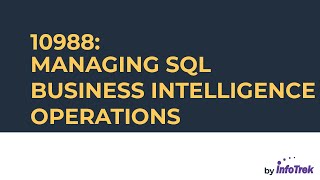 This three-day instructor-led course is aimed at database professionals who manage Business Intelligence (BI) operations. This course looks at various options that provide the ability of business users to analyze data and share their findings, starting with managed BI data sources and expanding to personal and external/public data sources.

· The primary audience for this course are business intelligence professionals.

· The secondary audiences for this course are technically proficient business users.

In addition to their professional experience, students who attend this training should already have the following technical knowledge:

· Some exposure to basic programming constructs (such as looping and branching)

· An awareness of key business priorities such as revenue, profitability, and financial accounting is desirable.

Operational management of BI solutions is on the increase. An organization’s need for information, coupled with the timely delivery of this information, means that IT departments are placing as much emphasis on operational frameworks to support BI solutions, as they are on the development outcomes. With the development of BI solutions complete, the right processes and people should be in place to ensure that the solution delivers. You should also use supporting technologies to ensure smooth operations. Furthermore, developing a supporting logging and troubleshooting framework can aid the debugging and resolution of BI issues. The aforementioned are brought together within a single operational management framework that enables a cohesive and proactive approach to managing the BI solution in the production environment. It also ensures the continued operation of the solution, while providing a structured approach to solving BI issues.

· Describe the rationale for BI operations.

The correct configuration of the BI components within the SQL Server product stack will have a big impact on the stability and performance of the overall BI solution. Configuring components by using best practice will enable the BI operations team to rule out the data platform as a root cause of issues that occur within the environment. Defining standards for server builds can help the effectiveness of the team to resolve issues in a known configured environment. Equally, understanding the type of architecture that a BI solution is implemented in will drive the standards for a given architecture.

· The Importance of Standardized Builds

· Describe the importance of standardized builds.

Managing the security of data within an organization should be the first priority for any operational team. Not only could the ramifications of a data leak lead to commercial losses, but there may also be legal and financial penalties that could have wider implications for the business. It is very important that the business intelligence (BI) operations team takes a holistic approach to securing the data. Considerations should include the physical security of the data, in addition to protection at an operating system or SQL Server level. Transfer of data to other sites and data at rest may have to be protected. In these cases, encryption components come into play. Meeting compliance requirements may force a business to track activity on SQL Servers, or provide access to data by using auditing.

· Setting up Security in SQL Server

· Describe the security approach to a BI solution.

Deploying BI solutions is a discrete part of the BI development life cycle. The BI operations team will be called upon to support the development team during the deployment. The aim is to successfully create the solution within a production environment for operational use. The presence of nonproduction environments provides the opportunity to practice the deployments before they are conducted on a production server, so that the deployments can run smoothly. A variety of tools and practices can be used to aid deployments. Each method has its own benefits and can be used in any environment. Understanding the tools that are available and the benefits they offer will help you to pick the right tool for the job and aid deployment.

The main aim of any operations team is to ensure the continued service of key applications that are used within the business—more organizations are seeing a BI solution as a critical application for ensuring success. Therefore, the BI operations team should implement a proactive approach to overseeing the general health of the servers and services that are being used. This will involve employing a number of technologies that can log the operations of a service to proactively manage any potential problems that are identified. There will be times when the BI operations team will have to be reactive, using monitoring tools to help identify the root cause of any potential issues.

· The Need for Logging and Monitoring

· Setting Up General Logging and Monitoring

· Setting Up Targeted Logging and Monitoring

· Describe the need for logging and monitoring.

The task of trying to troubleshoot failed BI solutions can be complex. It requires an understanding of the environments in which the BI solution is hosted, and an understanding of the workloads that take place during the life cycle of the solution. Troubleshooting can be made easier if the BI operations team has established defined standards for different tiers of servers for the configuration, security, and deployment of the solution. Standards create a baseline environment for the servers and the solution so that the BI operations team have a clear understanding of the environment that they are troubleshooting. With this in place, when an issue is reported to the operations team, they can adopt a structured troubleshooting approach that means they can resolve the issue, and understand the root cause—this leads to a long-term fix. As these issues are occurring within live environments, it is prudent to follow a process that is in line with operational procedures, so that you set the expectations for resolving an issue. This will typically involve applying a fix that follows either standard operating procedures or emergency operating procedures.

At the end of this module, you will know the correct approach for troubleshooting:

In this course, you have seen many of the operational activities that take place in an organization—they will often lead to the provision of a long-term solution to an issue that has been occurring in a BI environment. Sometimes, however, changes to resolve an issue that are made by the BI operations team, such as optimizing the BI platform, may not have the desired results. When the BI operations team are satisfied that they have exhausted all areas in attempting to resolve an issue, they might need to work with the development team to look at tuning the query aspects of the BI solution to improve performance. Many BI operations make extensive use of queries, and it might be necessary to look at these queries in more depth to improve performance. The BI operations team would also have to discuss taking advantage of BI component features to help in performance. For example, a suggestion might be made that Reporting Services snapshots could be used to help performance. However, the development team would need consulting to understand the impact of using such functionality on the overall solution.

· The Need for Performance Tuning

· Understand the need for performance tuning.

· Describe the BI queries required to carry out performance tuning.

· Use the tools for performance tuning.

You will be able to find the details in relation to the quotation requested inside your email’s inbox after filled in your contact number.
Please provide your contact number so that we can contact you should the need arise.
Book Private Class
Course:
10988: Managing SQL Business Intelligence Operations
Duration:
3 Days
Name:
Company Name:
Email:
Phone No:
Preferred Training Date:
Preferred Location:
Number of Pax:
Remark:
You have successfully submitted your private class request form.
We will contact you for further confirmation.